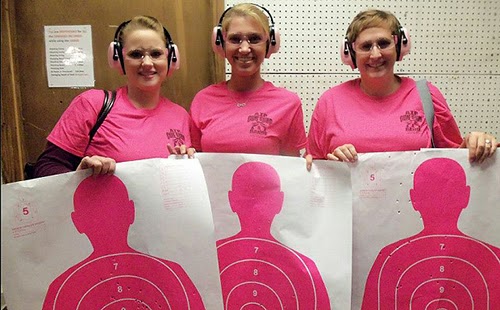 Whens the last time you visited a gun shop?  Was the experience everything you hoped for?  Or did you find it to be a testosterone-filled experience consisting of male store attendants, mostly male shoppers and few if any items geared for the female shopper.

That could be changing with the opening of women-oriented gun stores around the country. One such store is Shes A Pistol Gun Store in Shawnee, Kansas, owned by John and Rebecca Bieker.  Another is Davenport Guns and Shooting Club in Davenport, Iowa, which is the first female-theme gun store in the city.  Founded by Janelle Westrom, the store was originally planned to be a traditional gun shop.  Westrom shifted her plans when friends suggested she focus on women.  “I just wanted to help women feel more comfortable in a field dominated by men. It’s intimidating because you don’t know where to begin – where to start; a lot of it is a man’s world, Westrom mentioned.  The store focuses on making women feel welcomed.

Womens participation in shooting sports could be driving the trend.  Growth of women competing in target shooting has grown by 50 percent, and gun ownership by women has skyrocketed. In Florida, women hold 22 percent of all concealed carry permits, and in Texas women hold 28 percent of permits.

“Make it pretty and make it purple,” said Tori Nonaka, a competitive shooter and “Glock Girl” at the SHOT Show. Nonaka owns a purple-toned Glock that matches her hair.  Also in Las Vegas, visitors will find an indoor shooting range called The Gun Store whichprovides AK-47s for women and their attendees hosting bachelorette parties.

Its not just female military or police officers buying guns and concealed carry purses either. We sell to a lot of senior citizens and stay at home moms as well as professional working women.  Our customers are just average women, wanting to protect themselves, says Stella Blubaugh of Gunhandbags.com.

With more women buying more weapons than ever, its likely that more female-oriented gun shops and retailers are on the way.

Know how hard it is to find just the right pair of jeans?  Some jeans…

With new concealed carry permits exploding in Ohio, changes in the states stand your ground…