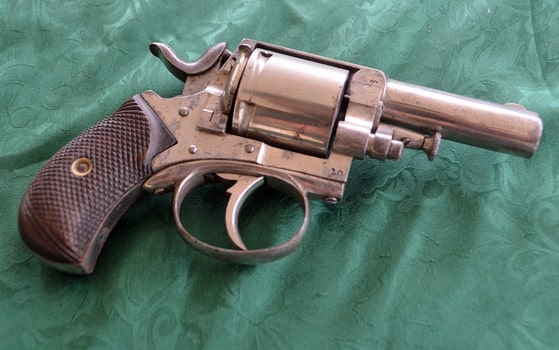 On Friday, June 20, it was reported that Smith & Wessons sales were down. Wall Street analysts and left-wing pundits erroneously reported that Americans are buying fewer firearms, particularly Modern Sporting Rifles. Overlooked in all the hand wringing was a quote from Smith & Wessons CEO, James Debney who reported a hefty increase in handgun sales, buoyed by growing consumer interest in self-defense. Debney said that unit sales for handguns jumped 30% in the most recent quarter. In speaking with several authorities on the retail side of the industry, the two most surprising subsets of that figure were an increase in women buying handguns and the handgun of choice being revolvers.

The revolver is the oldest defensive handgun still in existence. The first effective design was patented by Samuel Colt in 1836 and very little has changed in their mode of operation from that time to the present. The most significant being the introduction of cartridge ammunition in 1851 by Smith & Wesson (although Colt would continue producing cap and ball revolvers exclusively for another 20 years) and the evolution from a single-action mode of operation (where the shooter has to manually cock the hammer for each shot) to a double-action mode of fire (where squeezing the trigger cocks the hammer and fires the round).

For a woman, carrying a concealed revolver provides a unique set of challenges as opposed to a man. From an anatomical perspective women tend to be smaller framed and have smaller hands. This can pose a challenge from the point of view of manipulating and shooting the weapon safely, not to mention dealing with felt recoil and the shape of a woman’s body or even the cut of her clothing when it comes to concealment.

Sometimes the best holster for a woman is a specially made purse designed for concealed carry. This Examiner took some time to get an overview from Mary Kirkpatrick, CEO of Gunhandbags.com as to find the best purse holsters on the market.  We offer holsters of different designs that reflect trends in whats fashionable, said Ms. Kirkpatrick, Too many manufacturers offer a simple leather purse that looks plain and might work well as a holster, but if it is not carried and used, it will be useless.

Ms. Kirkpatrick said that sales are varied, but depend on the customers sense of style and the type of revolver that is being carried.

The key to women carrying these small revolvers is that the guns must be lightweight, have lower recoil and be chambered in a caliber that is effective.

The Smith & Wesson J-Frame leads the pack and is offered in 38 Special and 357 Magnum. This revolver is available in a variety of models, barrel lengths and finishes. For a woman forgoing a belt and a holster it can easily be concealed in a purse holster such as the Italian Embossed Hobo Limited Edition concealed carry purse.

Another option for the J-Frame is the Clip Grip by DeSantis Holsters. This replaces the revolver’s grips and has an external hook allowing the revolver to be carried in a waistband or internal pocket of a holster purse.

The Ruger LCR is a polymer framed double action revolver chambered in 38 Special, 22 Magnum and 357 Magnum. The LCR revolver is very small and weighs a mere 13.5 ounces. As a result perceived recoil can be sharp, but the design has proven to be very popular with female shooters as a defensive handgun in 38 Special and 22 Magnum. Not much larger than a smart phone or an IPod, it can be hidden yet accessible in a purse such as a Terrain Messenger.

North American Arms serves up a variety of miniature single-action revolvers chambered in 22 lr and 22 Magnum. The standard grips on these revolvers are very small and meant for maximum concealment, but slightly larger grips are available to give the shooter a better purchase on the little revolver.

The North American Arms Black Widow is the big sister to the Mini Revolver and offers a full size rubber grip. With an unloaded weight of 14 ounces, the appropriate home for this revolver might be in a Cavalier Flap Messenger purse. The 22 Magnum round is controversial as a self defense round. While it is actually designed as a rifle cartridge, companies like Hornady market a line of Critical Defense ammunition optimized for use in short handgun barrels.

One of the best revolvers for women is no longer in production. Colt’s famous D-frame series (consisting of the Detective Special, Agent and the Cobra) is slightly larger than the Smith & Wesson J-Frame. This added weight and all steel construction reduces recoil and offers an extra round of 38 Special in its six-round cylinder.

Taurus firearms is beefing up their concealed carry revolver line this year and in the coming months as they are released, we should see more choices available that will be lighter and effective.

This is the year of fashionable concealed carry purses for women.  Lots of new concealed…