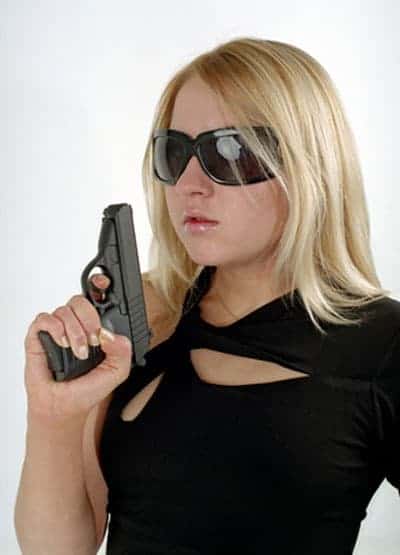 If youre a woman new to concealed carry, as I am, you may be wondering how to carry your gun. The same day I received my CCW permit, I visited a local gun shop to buy my first gun.  While buying the gun was really fun, I was disappointed in the conceal carry handbags available to women. The shop was owned and ran by a man and he apparently thought only women would be buying weapons. The holsters he sold were big, bulky and clearly not meant to fit anywhere on my body.  And no concealed weapon purses could be found anywhere.

Figuring this might just be an isolated store, I drove to another, bigger gun store that is further from my house. To my dismay, this store was just like the last.  In fact the guy working the counter seemed to only direct his attention to my husband, who was with me, and not to me even though I was the customer.  Ugh!

I heard Cabelas was starting to get more lady oriented product in but there isnt a location anywhere near me. So online we go!  Back at home, I started researching options.  At www.gunhandbags.com I found holsters, range bags and purses.  One was a holster that hooks to the middle of your bra, called the Flashbang.  At first I thought that would be uncomfortable, bulky and look like you had a third boob under your shirt.  But I watched the video demonstrations and it seemed to work well. So I ordered one. I am waiting for it to arrive right now.

I also decided I wanted to be able to carry my gun in my handbag.  Isnt that one of the reasons to get a CCW permit anyway?

I found a beautiful, stylish concealed weapons purse that is part of a new line made for a youthful market. It will hold my wallet, keys, phone and my weapon. Its not a leather bag, more of a fabric/fake leather type of material.  Im not an expert in that, but it looked pretty in the picture so I put one in my shopping cart and headed to checkout. Most gun purses for women, youll find, are constructed of leather but Im more into pretty, feminine styles than I am into leather.  I wish more manufacturers made concealed carry for women with fabric.

While I have heard some people say that carrying a gun handbag is not a good idea because someone might steal it, I believe it is far more likely you will encounter a threat to yourself or family that requires quick access to your weapon. Using concealed carry purses & handbags are great solutions to that. If I dont have my gun right next to me in my purse, it would likely be at home, which defeats the purpose of having the CCW permit and buying a gun in the first place.

So now I am set.  I have my permit, gun, holster, and a gun handbag.  Now where are all those bad guys?

Don’t Let Good Manners Keep You From Being Safe

I was at a laundromat one afternoon, and I noticed a man talking very enthusiastically…