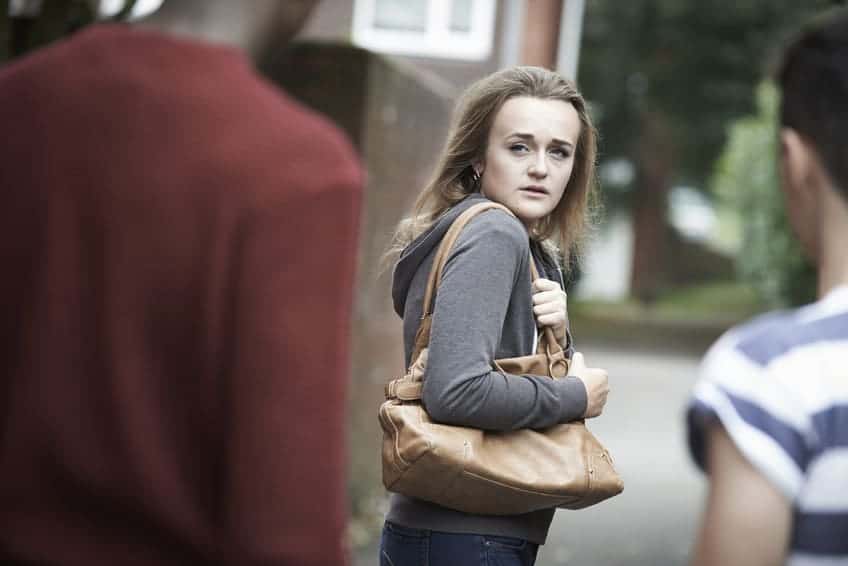 I was at a laundromat one afternoon, and I noticed a man talking very enthusiastically to a woman.  I watched them closely as she seemed uncomfortable with his attention, but kept responding to his patter with one or two word responses. He stood close to her, and his eyes kept crawling over her.

She hurriedly packed up her clothes and headed for the door. A young lady came in with some flyers, looking for an employee of the laundromat. The man quickly approached her and started up a conversation about the flyers. She was a student at the local university who was looking for volunteers for research. The man started asking her about the research, and she responded gladly, telling him about the project. He asked how he could get more information, and if he could have her phone number. She offered a college number and he persisted, asking for her number. Her smile faded and she backed up a step, and disengaged.

This man was intrusive, aggressive, and had poor boundaries. The woman folding her laundry inadvertently encouraged him to continue by offering him verbal minimal encouragers. A polite word or two from her kept him engaged. She was clearly uncomfortable with his proximity and attention, but did nothing to discourage him. She did not communicate her boundaries.

The other young woman felt something wrong as well, and did not encourage him any further. Maybe this man was just lacking in social skills and wanted to meet someone. Maybe he was a sexual predator. You dont want to stick around and find out the difference.

Good manners are very important. Being polite conveys respect, consideration for others feelings, and is a sign of breeding, refinement and sophistication. Good manners will serve you well in nearly all social situations. The exception is when a potential predator is testing your boundaries.  Knowing the difference is critical.

Awareness & Listening to your Intuition

Someone elses feelings are secondary to your right to safety. I have been approached by strangers for whatever reason, and I have been downright rude if they make me uncomfortable.  I was in line at the grocery store and a man behind me looked at me, nodded and smiled. I did not recognize him, so I made eye contact, and then pointedly looked away without changing my expression. I paid for my groceries, and went to my car. As I was stepping into my car, he approached, saying excuse me, can I ask you a question? I held my hand up in a stop gesture, and said no and shook my head. I got into my car and drove way. I have no ideas who he was, what he wanted, nor did I want to find out.  It didnt feel right.  If I hurt his feelings, I really dont care.

If something feels wrong, it is wrong.

Do not ever second guess yourself on this. People have excellent intuition about danger, but we choose to ignore it.  When there is an immediate threat, you need to act decisively and effectively. That can mean something as small as changing direction and not walking down a certain street.

Here is another absolute: strangers have no business getting within three to five feet of you, unless you are in a crowded public space, or you have clearly invited them into your space. If you are on a bus or subway, or a crowded theater or club, people getting close to you, or bumping into you or brushing against you is an expectation. Most people will tense up a little draw in their shoulders, pull their arms close to their bodies, or say excuse me if they brush against you- this is a message that the intrusion was unintentional. Beware of strangers getting close to you. Someone walking toward you on an intercept course, or someone gradually moving closer and closer to you, a little too casually, should get your undivided attention.

What do you do if someone is intruding?

You must decide on your boundaries and your response beforehand. This is the time to utilize critical thinking; when there is no imminent danger, consider your responses in different situations.  By definition, an intrusion is carried out by someone you are not interested in communicating with, for whatever reason. In the words you have considered beforehand, respectfully, evenly, firmly indicate you do not want to communicate, and you do not want their attention.  Excuse me, but I have work to do, I cant talk or whatever.

This is still the time to use good manners, but your words and body language should leave no room for doubt that you do not want to be engaged. If they dont get your unequivocal message, and persist in trying to talk to you, or are edging closer, it is time to be more assertive. Repeat your message, louder, especially if you are in a public place. Draw some attention. Being outright rude, as I have been in some situations, is debatable, as you may provoke someone  by insulting them or disrespecting them. If you are rude, you need to be prepared for a more aggressive response from the other party.

3 Tips To Making Sure Your New Neighborhood Is Safe

According to http://www.census.gov the median price of a new home sold in the United States…