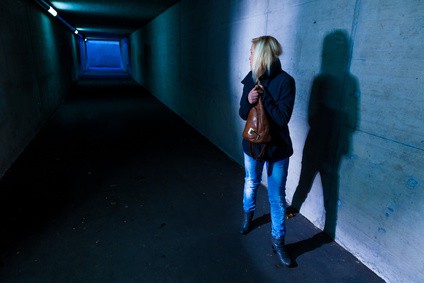 It was 7:00 p.m. on a winter night in Carson City, Nevada. The author had worked late and the early evening sunsets made it seem more like midnight.

Because I was working late, my wife had me on the phone asking me to pick up something at the grocery store on the way home. While talking to her, I pulled into a gas station on North Carson Street to fill up my truck. As I took my wallet out of my pocket, I heard shouting from across the street.

Looking over, I saw three adult males, crossing the intersection and shouting drunkenly to each other. As I was sizing them up when the gas pump threw an error and I needed to swipe my card, again.

Seeing a middle-aged man fumbling with a wallet and an I-Phone at a gas pump with a fairly new and expensive truck appeared to be an easy mark. To them I was some guy in what we would refer to as Condition White, which is a euphemism for chum in the water to the sharks. The guy in the middle nudged the man on his left, who began walking deliberately to the other side of the gas station and around the side of a dumpster; away from the direction the three were originally headed.

Recognizing that I might be in the midst of an ambush I told my wife: “I have to go” and literally dropped my phone to the ground while I moved my hand to my Sig Sauer P229 in a DeSantis Intruder.

In that instant a lesson I learned from an inner city police officer two decades previous ran through my head and in the loudest most direct tone I could muster, I shouted: “Yo Homes! We don’t got no guns over here!”

The one who veered off from the other two stopped in his tracks and shifted his gaze from me to his companions. The apparent leader made a slight movement with his head and the three continued in their original direction without so much as looking back. I got back in my truck and drove to another service station.

So why did you say that?

One of the traits of a criminal is that they are sociopathic in nature. They do not view the world in the same light as normal people. They do not earn their living by getting up and going to work a 9 to 5 job. Their way is to take what they can by subterfuge or by force. As a result they have a different thought process and to a degree speak a different language than the rest of us.

Some CCW instructors teach their students to warn off potential attackers with “Stay away, I have a gun and I am ready to use it.” This is thought to alert potential witnesses that you performed your due diligence and make the bad guy rethink his game plan. Some instructors teach women how to use concealed carry handbags.

Unfortunately, in the real world this will embolden a sociopath who will offer to give a proctology exam with the firearm in question. However by saying that you do not have a firearm, the average witness would most likely repeat in a court room that you issued a warning of some type if the event does escalate.

If you talk to police officers, go on a ride along with a local department or even watch reality-based police shows, one thing that you will learn is when an officer asks a suspect if they are holding anything (drugs, needles or weapons) is if the answer is just “No”, then likely the suspect does not have any of those items.

It is a form of psychological projection on the part of the criminal trying to hide something. It is the language they understand. Maybe the warning resonates on that level, maybe they think that they just stumbled upon a fellow thug who wont think twice about ending their night.

Either way, it increases the chances of rapid de-escalation. A warning of this nature does not come off as a challenge to the thugs manhood.

It comes off as a warning.

In the authors case, it made them look for easier prey or go back to doing whatever it was they were doing before they made the biggest mistake of their lives.

It also made me go out and buy a Bluetooth earpiece for my phone.

Concealed Carry on Campus: Would You Protect Your Daughter?